Will my metabolism really slow with age? - Health Channel

Will my metabolism really slow with age? 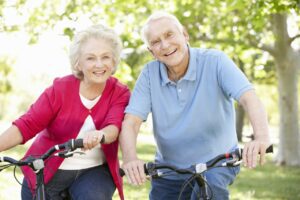 Metabolism comprises a number of biochemical processes that are necessary to maintain life.  One type of metabolism (catabolism) produces energy by breaking down complex molecules. The breakdown of carbohydrates during digestion is an example of a catabolic process.  The other type of metabolism (anabolism) is constructive, such as when muscle mass is increased. Anabolic processes consume rather than produce energy.

Effect of metabolism on body weight. The metabolic rate is the relative speed at which anabolism and catabolism are occurring.  In simple terms, body weight is a result of catabolism minus anabolism. If catabolism exceeds anabolism, more energy is produced that is being used.  When this happens, the excess energy produced is stored in the body in the form of fat or glycogen (the storage form of carbohydrates).   If anabolism exceeds catabolism, however, more energy is being “burned” than produced and weight loss occurs.

Fast vs. slow metabolism.  When someone is referred to as having a “fast metabolism”, the implication is that their body’s engine is highly efficient at burning calories. An example of this might be an active, growing adolescent who stays slim despite eating huge quantities of food.   Obese individuals, on the other hand, are often labelled as having “slow metabolism”. While this is usually inaccurate, these are the individuals that seem to gain weight in spite of eating “like a bird”.  There are only a few situations, such as having an underactive thyroid gland (hypothyroidism) in which metabolism is truly slowed down. Many people have the understanding that with aging, a slowing of metabolism occurs that results in an inevitable increase in fat stores and weight gain.

Effect of muscle and fat on metabolism. Muscle is a more metabolically active tissue than fat.  The more muscle that an individual has, the more energy (calories) is required to maintain that muscle. A bonus to having a higher percentage of muscle over fat is that while at rest (basal metabolism) muscle burns more calories than fat. The difference is relatively small, in the range of an additional 5 to 7 calories per pound of body weight per day, but over time this can add up significantly.  This makes losing weight and keeping it off easier for more active individuals.

What about supplements?  A number of non-prescription products claim to increase metabolism or fat burning.  While green tea has been shown, at least in one study, to have some slight fat oxidation potential, more often than not these products are a sham. In some cases, they contain ingredients with potentially harmful side effects. Recently, supplements containing the herb Acacia rigidula were removed from the market because of stimulant side effects increased heart rate and caused high blood pressure.

Effect on aging on metabolic rate.  Aging, primarily due to a reduction in activity level and increased caloric intake, often results in a loss of muscle mass and increased fat stores.  Since fat is less metabolically active than muscle, technically our metabolism does slow down with aging.  Coupled with this is evidence that as we age, our mitochondria, the tiny “energy factories” in our cells, slow down their function. There is also evidence, however, to indicate that a major slowing of metabolism associated with aging is not necessarily inevitable. Staying physically active and maintaining a healthy weight can help reduce this “slowing”. This is a classic example of “use it or lose it”—either we take the steps to keep our metabolism revved up or we concede to the effects of aging.

If you have any more questions just Ask Hanna, our health advisors are here to help.
Image: ©Shutterstock / Monkey Business Images