Why does my stomach make so many noises? - Health Channel

Why does my stomach make so many noises? 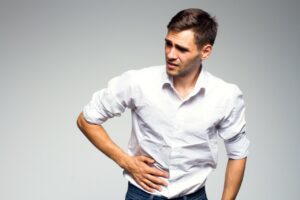 Stomach “growling” is typically associated with hunger or an absence of food in the stomach.  The medical term for intestinal rumbling is borborygmus (bor-boh-RIG-mus).  If you say this out loud, you may find that pronouncing the word mimics the sound produced when your stomach growls.  In fact, the word borborygmus is an example of onomatopoeia, a word that imitates a sound. It comes from a Greek word that translates as “rumbling”.

Sounds heard in the abdomen involve activity of the smooth muscle that lines the stomach and small intestine.  This muscle produces peristalsis, a progressive wave of contraction and relaxation that forces food, gas, and liquids through the stomach and intestines.  Peristalsis, like the beating of the heart, is under the control of the autonomic nervous system, occurring on a regular basis without requiring conscious effort.

In some cases, as with viral gastroenteritis (“stomach flu”), the sounds can be accentuated due to an increase in peristalsis. Increased amounts of gas in the intestinal tract may also bring about excessive abdominal rumbling.  One cause for this is lactose intolerance, a condition that occurs when the body does not make enough of an enzyme called lactase. With insufficient lactase in the intestine, lactose sugar, commonly found in dairy products, is instead broken down by gas-producing bacteria in the bowel.

Bowel sounds can be reduced when intestinal peristalsis is slowed down. This could be due to taking an opiate medication, receiving general anesthesia or undergoing bowel surgery.  A more serious situation may exist when bowel sounds stop altogether. This could indicate a problem such as bowel obstruction or an abdominal infection.

In general, the sounds produced in the abdomen, including growling, are not a sign of disease.  Stomach growling may be socially embarrassing, but in most cases is just a sign that the gastrointestinal tract is doing its job.

Sources for article:
Abdominal sounds from Medline Plus
Why does your stomach growl when you are hungry? from Scientific America
Why does my stomach growl and make noises? from Tufts Now

If you have any more questions just Ask Hanna, our health advisors are here to help.
Image: ©Shutterstock / Yuricazac