What is the function of the liver? 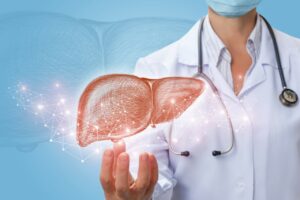 When I think about the liver, I’m often reminded of a comedy sketch from a Monty Python movie. In the sketch, organ donor nurses arrive at a patient’s home, requesting her liver before she is deceased. When the patient complains that she “hasn’t finished with it yet” the nurses launch into a whimsical song about how insignificant humans are compared to the vast size of the universe, and in the end, the patient reluctantly agrees to give them her organ, and the surgery commences in her living room. All completely silly, but the song is quite catchy.

But, I digress. The liver is a 3 pound, football-sized organ that sits just under the right rib cage. It is remarkably complex in its function, and does everything from detoxifying the blood (including breaking down medications and dumping them into the intestine where they are removed in the stool), producing blood clotting factors and various proteins, digesting fat and protein (the gall bladder stores soap-like chemicals produced by the liver), and storing glucose, vitamins and minerals, and helping to control metabolism. I think of it as a big, multi-functional factory that we can’t live without.

What injures the liver?

What happens when the liver fails?

Although the liver is a fairly resilient organ, due to the fact that it can actually grow back when it is injured (the only organ that can do this!) sometimes it can become injured beyond repair, and then it goes into full failure with these results:

How can I keep my liver healthy?

The good news is that for those with end-stage liver failure, transplantation may be an option. Liver transplants are usually very successfully, though unfortunately there are about 15,000 people on the waiting list for one right now in the United States. I myself have chosen to be an organ donor, and I hope you’ll consider it too. Because (heaven forbid) if we are in an accident, at least that way we can give the gift of life to others. I have no doubt that (unlike that comedy sketch) there will not be a man who climbs out of our refrigerator to sing us a song about giving up our livers before we’re finished with them!

If you have any more questions just Ask Hanna, our health advisors are here to help.
Image: ©Shutterstock / Natali_ Mis