What is Psoriasis? - Health Channel 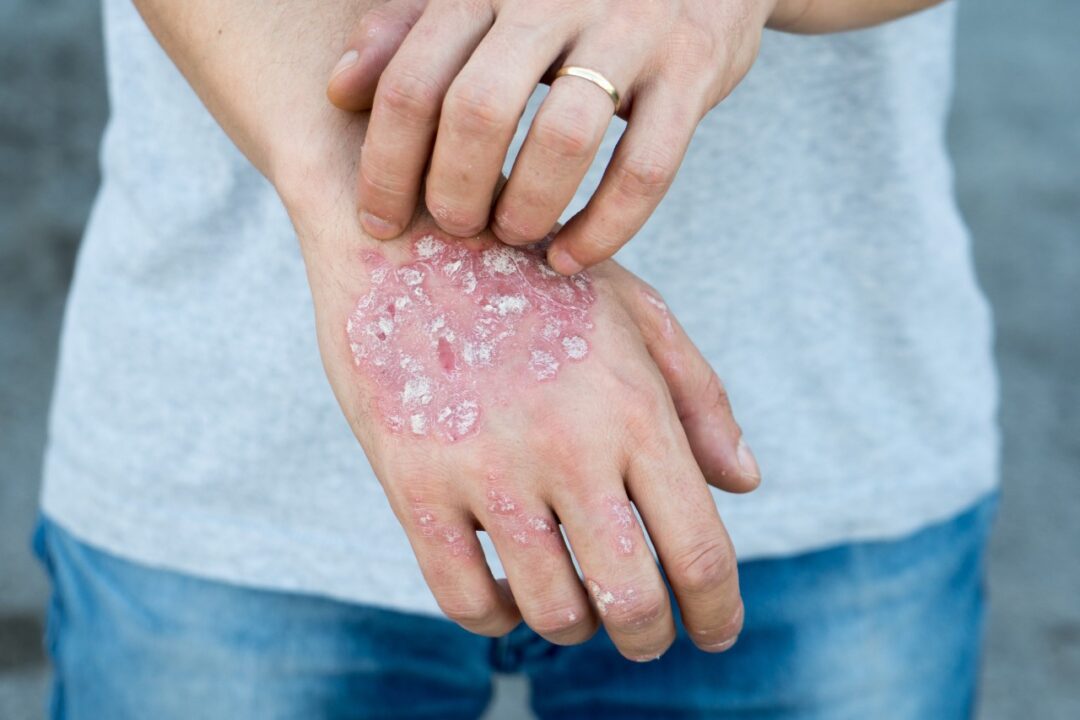 Psoriasis is much more than just a skin condition. It is actually a life-long disease of the immune system that, in addition to causing skin lesions, is associated with a number of other health issues including arthritis, depression, and an increased risk of heart disease and diabetes. Psoriasis affects around 7.5 million Americans, with most people developing their initial symptoms in young adulthood.

Types of psoriasis. There are five types of psoriasis with each type affecting the skin in a different manner. The most common of these, affecting approximately 80%, is called “plaque psoriasis”. In this type, skin lesions appear as raised, red patches (plaques) covered with a silvery white buildup of dead skin cells (scale). Other less common types of psoriasis are named guttate, pustular, inverse and erythodermic. Guttate psoriasis is the second most common type of psoriasis, occurring in 10% of cases. This type often starts in childhood or young adulthood following a streptococcal (strep) infection. Erythrodermic is a rare form of psoriasis but is considered to be a dermatological emergency.

What causes the skin lesions? For reasons yet to be determined, psoriasis triggers an inflammatory response from the immune system that causes skin cells to reproduce more rapidly than normal. Instead of taking around a month to mature, skin cells mature in a matter of days. This causes them to “pile up”, forming the characteristic thickened, scaly rash. The most common locations for the skin lesions are the outside of knees and elbows, the scalp, the lower back, the face, the palms and soles of feet. The rash can also appear on the fingernails, toenails, the genitals and inside the mouth.

Psoriasis Triggers. Psoriasis is characterized by flare-ups and remissions. Typically the initial outbreak as well as later flare-ups occurs as a result of a trigger. Some of the most common triggers are:

Risk for other medical conditions. People with severe psoriasis are around 50% more likely than the general population to have a heart attack, stroke, or to develop Type 2 diabetes. Psoriasis patients also have a higher incidence of inflammatory bowel disease, certain types of cancer (lymphoma and skin cancer), and depression. Because of the increased risk of diabetes and cardiovascular disease, it is important that people with psoriasis keep their weight, blood pressure, and cholesterol level in an acceptable range, and receive screening for diabetes. Additionally, a serious form of arthritis (psoriatic arthritis) develops in approximately 30% of people with psoriasis. Features of psoriatic arthritis include stiffness, pain and swelling of the joints and abnormalities of the finger and toe nails.

How is psoriasis treated? Psoriasis is a life-long condition with no cure currently available. There are, however, a number of treatments that can reduce flare-ups of the rash. The main goal of treatment is to slow the growth of skin cells. This treatments fall into 3 categories:

Since treatment must be individualized and there are a number of potential side effects associated with psoriasis therapies, it is recommended that treatment be initiated and supervised by a Dermatologist.

If you have any more questions just Ask Hanna, our health advisors are here to help.
Image: ©Shutterstock / 2Ban