What is anemia? - Health Channel 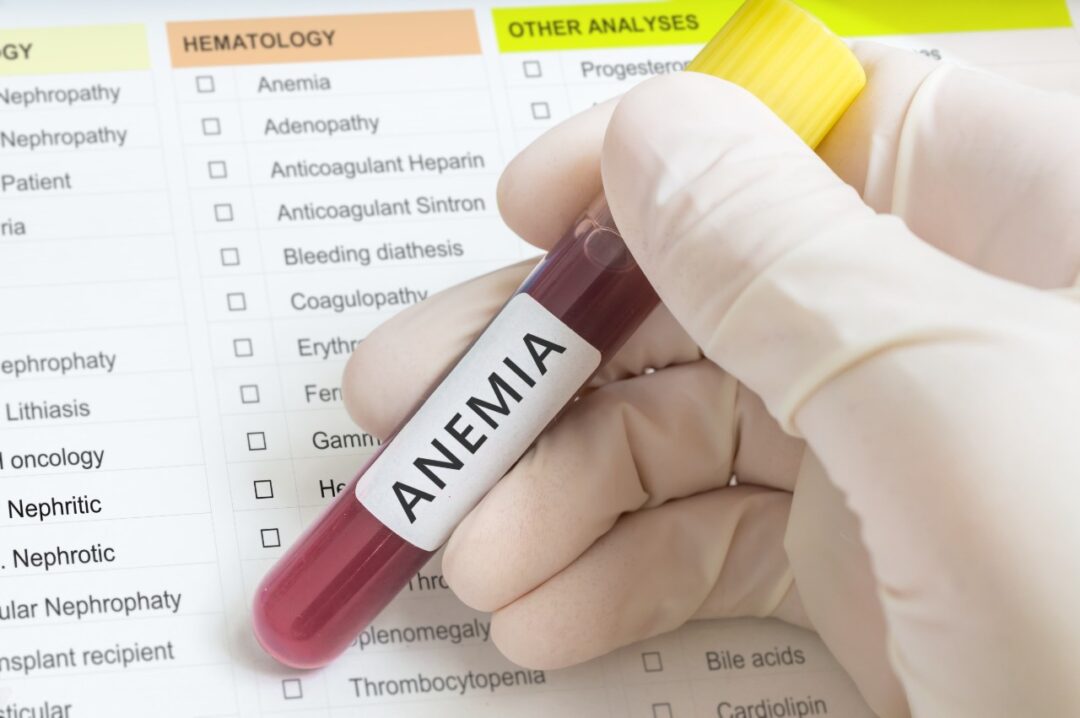 The term “anemia” is quite broad, and simply means that there is a problem with a person’s red blood cells (sometimes there are too few, sometimes they are malformed). Red blood cells are manufactured in the bone marrow and are basically tiny sacks of oxygen-carrying hemoglobin molecules (centered around an iron atom) that circulate through the blood stream and release the oxygen gas wherever needed along the path back to the heart and lungs. Extra red blood cells are stored in the spleen. Red blood cells make up 25% of all cells in the body, and are constantly being replenished.

When there isn’t enough oxygen being carried to the tissues, all the typical symptoms of anemia can occur: fatigue, dizziness, rapid heart rate (the heart is trying to compensate for the low number of red blood cells by pumping the ones it has around faster – this can lead to irregular heart rates or arrhythmias), chest pain, shortness of breath, and pale skin.

What causes anemia?
The most common cause of anemia is bleeding. If your red blood cells are leaking out of your arteries or veins, then there are fewer of them being transported inside the blood vessels. Sudden losses of blood (that can occur with gunshot wounds or traumatic accidents) cause anemia, but slow, chronic losses of blood (such as a stomach ulcer, or heavy menstrual periods) can do the same but go undetected. The other causes of anemia are less intuitive, and can be difficult to diagnose. Hematologists are specialists in anemia and blood disorders, and are often consulted in cases where the primary care physician hasn’t uncovered the cause of anemia. Blood tests that determine the size and shape of the red blood cells, along with kidney function, liver tests, and iron, folate, and B12 levels can be helpful.

Red blood cell destruction: sometimes mechanical heart valves or devices inserted in the heart to help it pump can “chew up” red blood cells over time, creating lower levels of them. Some genetic diseases cause the bone marrow to produce weak or odd-shaped cells that break open easily and don’t last as long as regular red blood cells (which survive about 4 months). Examples include thalassemia and sickle cell anemia.

Red blood cell production suppression: certain medicines (especially chemotherapy and antibiotics), toxins (such as alcohol), and infectious diseases (such as HIV), can cause “aplastic anemia” by suppressing their production in the bone marrow.

Iron deficiency is a common cause of anemia. Just as thyroid glands can’t make thyroid hormone without iodine, bone marrows can’t make hemoglobin without iron. Iron is found in certain foods (red meat, pork, poultry, seafood, beans and peas, dark green leafy vegetables, dried fruit, such as raisins and apricots) but unlike iodine (which is added to table salt to prevent deficiencies, and table salt is added to virtually everything we eat), iron is only added to a few foods, such as fortified cereal, bread and pasta. So it’s easier to become deficient in iron than it is in iodine, at least in the United States.

Kidney disease: the kidneys actually produce a hormone (called erythropoietin) that stimulates red blood cell production in the bone marrow. When kidneys are injured or sick, anemia can occur.
So if you are diagnosed with anemia, it is very important to determine the true underlying cause or causes, so that it/they can be treated effectively. I’ve seen some of my physician colleagues treat all their anemic patients with iron supplements (since that is probably the second most common cause of anemia) rather than ordering further testing to make sure that this is the right solution. As you can see, anemia can be a sign of anything from a dietary deficiency, to internal bleeding, to medication toxicity, infection, alcoholism, kidney disease, or a genetic condition. If you have been diagnosed with anemia that has not responded to iron supplements (which, by the way, can cause some pretty nasty constipation), you might want to consider further testing or a second opinion from a hematologist.

The good news is that we have excellent treatments for anemia, and most people will feel much better once the right treatment is initiated.