What is an autoimmune disease? 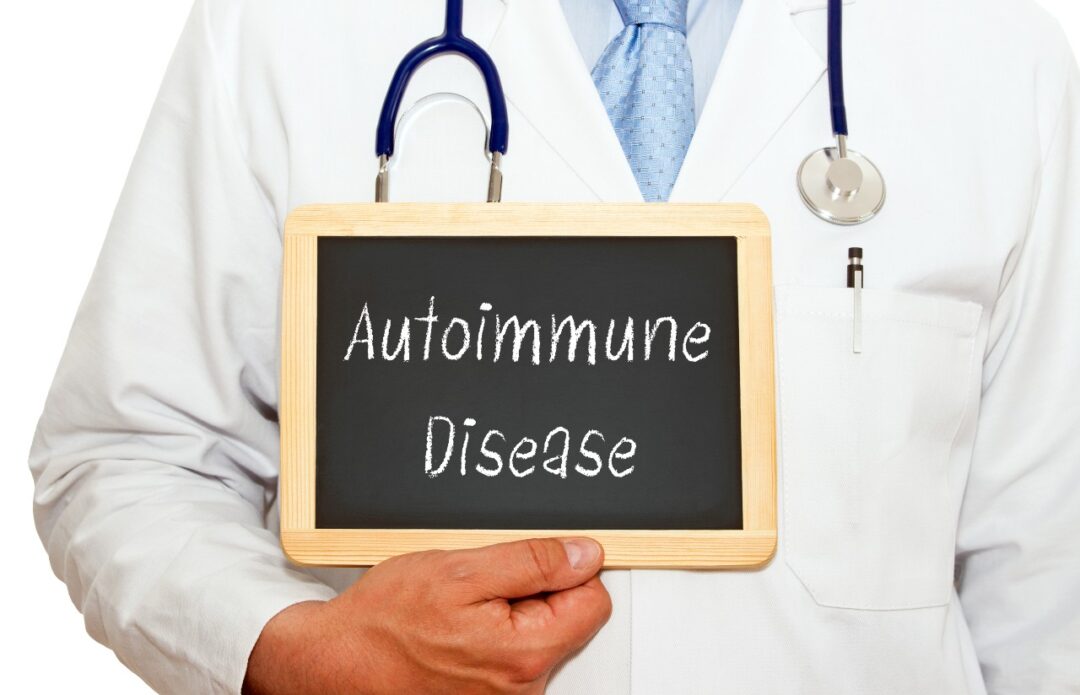 The immune system is a complex system of specialized cells, tissues, and organs designed to defend the body from germs and other invaders.  Central to the normal function of the immune system is its ability to distinguish between what is part of our own healthy bodies from a potentially harmful agent.

The part of the immune system that is primarily involved in the development of an autoimmune disease is called the “acquired” immune system.  This system develops during our lives as it responds to “attacks” on the body from invaders, such as bacteria and viruses.  One of the most important components of the acquired immune system is a type of white blood cell called lymphocytes. One type of lymphocyte, the T-cell, scans the body for foreign invaders and can directly kill infected cells or summon help from other disease-fighting cells of the immune system. Another type of lymphocyte, the B-cell, produces antibodies used for fighting infections and can also remind the body of a germ that has been encountered previously. Vaccines use the acquired immune system to prevent infectious diseases by stimulating an immune response in the body in a manner similar to the way the immune system fights off a real infection.

An autoimmune disease occurs when the immune system targets the body’s own healthy tissues by mistake, signaling the body to attack them.  For reasons that are not completely understood, the antibodies and lymphocytes that would ordinarily provide protection to the body end up causing a number of autoimmune diseases.  The hallmark of an autoimmune disease is the development of inflammation, which can cause redness, heat, pain, and swelling. Autoimmune diseases can affect most of the organs or systems in the body.

The following are some of the most common:

Celiac disease—An autoimmune condition that causes inflammation in the small intestine. When people with celiac disease eat foods containing gluten their immune system reacts by damaging the villi, the finger-like projections protruding from the lining of the intestinal wall. This prevents the absorption of important nutrients, producing symptoms including diarrhea, weight loss and fatigue.

Type 1 Diabetes—In this condition, the immune system attacks and destroys insulin-producing cells of the pancreas.  This makes it impossible for the body to use glucose for energy and can even result in life-threating complication called diabetic ketoacidosis. The more common form of diabetes, Type 2, is not considered to be an autoimmune process.

Rheumatoid Arthritis—In RA, the immune system produces antibodies that attach to the linings of joints. The immune system cells then attack the joints, causing inflammation, swelling, and pain. If untreated, rheumatoid arthritis can eventually cause permanent joint damage.

Psoriasis— A disease that causes new skin cells to grow too fast and pile up on the skin surface. It is a life-long disease of the immune system that, in addition to causing skin lesions, is associated with a number of other health issues including arthritis, depression, and an increased risk of heart disease and diabetes. People with psoriasis develop thick red patches, covered with scales, usually appearing on the head, elbows, and knees.

Systemic Lupus Erythematosus (lupus)—In lupus, multiple systems including the joints, lungs, nerves and kidneys may be attacked by the immune system. Although the exact cause is not known, it appears that there are hereditary as well as environmental factors in it development. Symptoms of lupus can include fever, fatigue, joint pain, a rash on the face over the cheeks and nose, headaches, memory loss, shortness of breath and chest pain.

The immune system does an amazing job of protecting the body from infections and even cancer, often without us knowing it.  In the case of autoimmune diseases, however, the immune system is also capable of producing a variety of conditions that can be challenging both to diagnose as well as to treat.

If you have any more questions just Ask Hanna, our health advisors are here to help.
Image: ©Shutterstock / docstockmedia