What is Alopecia Areata? - Health Channel

What is Alopecia Areata? 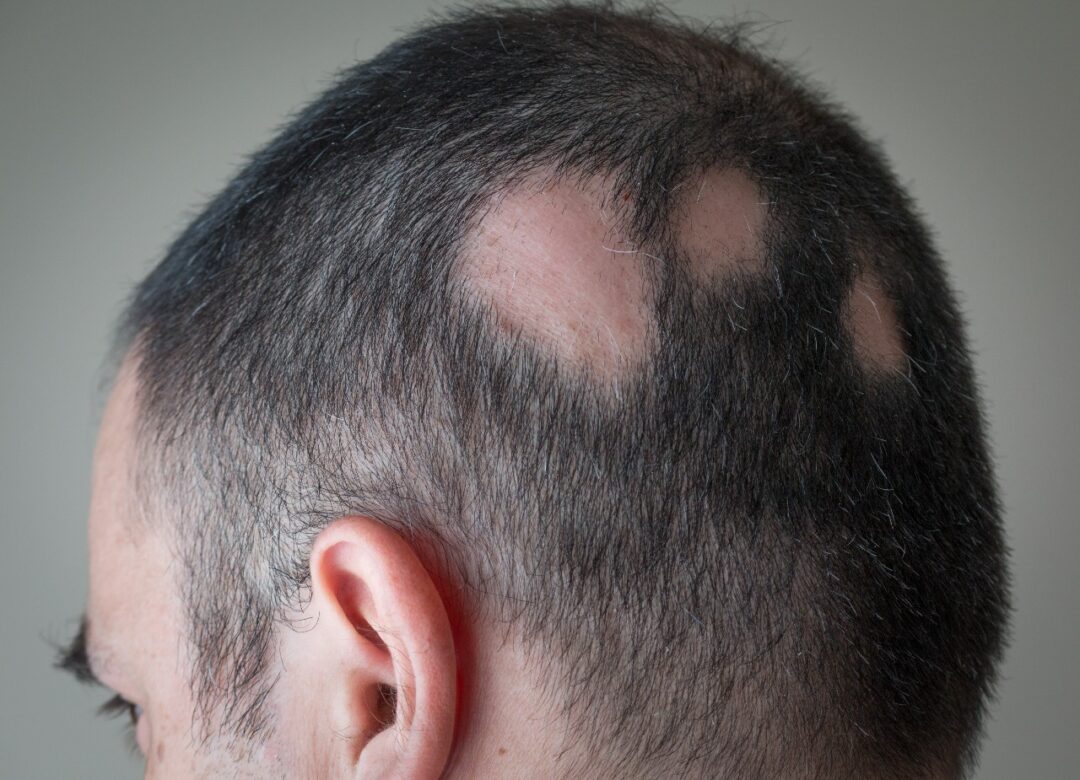 Alopecia areata is a disease that affects hair follicles, resulting in patchy areas of hair loss.  In rare cases, the disease causes total loss of hair on the head and other areas of the body.  In general, alopecia areata is a benign condition, although it may cause significant emotional or psychological distress.

Who Gets alopecia areata?  Alopecia areata is most common in adults 30 to 60 years of age, however, it may also begin during childhood. It affects men and women equally. In some cases, the onset of alopecia occurs after a major life event such as an illness, pregnancy, or trauma.

What Causes alopecia areata?  A definite cause for the development of alopecia areata is not known.  It is considered to be an autoimmune disease in which the body’s immune system mistakenly attacks the hair follicles. In some cases, genetics appears to play a role since there is a higher likelihood of developing alopecia in someone with a family history of the condition.

What symptoms are associated with this condition?  In general, there are no symptoms connected with the hair loss of alopecia areata.  The condition typically begins with one or two small patches of hair loss. These areas are smooth and round in shape with no scarring.  Occasionally, the hair loss may affect the beard area, eyebrows or rarely, the entire body.

How is alopecia areata diagnosed? A well-defined area of hairless skin in an area of normal hair growth is the classic finding in alopecia areata. Often, this appearance alone is adequate to make the diagnosis. If the diagnosis is in question, a skin biopsy may be necessary to confirm the condition. On microscopic examination, inflammation of the hair follicles is typically present if the hair loss is due to alopecia areata.

What other conditions cause patchy hair loss? Tinea capitis (ringworm), a fungal infection of the scalp, is the most common condition that mimics the hair loss seen in alopecia areata. This infection is most common in children and is associated with scaling and redness of the scalp, findings not seen in alopecia areata. Traction alopecia, seen primarily in women, is caused by a pulling force being applied to the hair. This can occur as a result of wearing tight braids, wigs or using hair curlers. A psychological condition known as trichotillomania is also associated with patchy hair loss. This disorder is associated with compulsive urge to pull out one’s hair, leading to hair loss and balding.

Does the hair ever grow back on its own?  In many instances the hair does grow back without specific treatment. It is not uncommon, however, for there to be several cycles of hair loss and regrowth before the condition resolves. The more extensive the hair loss and the longer the period of time of hair loss, the less likely it is that the hair will regrow on its own.

How Is Alopecia Areata Treated?  There is no cure for alopecia areata although certain treatments may help the hair to grow back more quickly. These treatments include:

How does someone cope with this disease? As mentioned, the hair loss in alopecia areata can be embarrassing or the cause of emotional distress.  Men as well as women with this condition sometimes chose to shave their heads rather that endure the patchy areas of hair loss. Others wear a wig, cap or hat to cover the bald spots. It can be helpful for someone with this condition to talk with others who are dealing with the disease or to a counsellor if the hair loss is causing a loss in self-esteem. Support groups are organized all over the world by the National Alopecia Areata Foundation. It should be reassuring to someone with this condition to know that alopecia areata will not make them feel sick and is not associated with a serious underlying medical condition.

If you have any more questions just Ask Hanna, our health advisors are here to help.
Image: ©Shutterstock / Alex Papp