What can be done to avoid traveler's diarrhea? - Health Channel

What can be done to avoid traveler’s diarrhea? 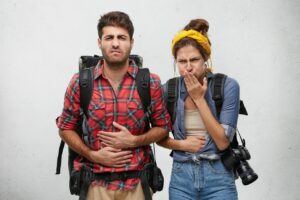 Every year, an estimated 10 million international travelers are affected by traveler’s diarrhea (TD), a gastrointestinal disorder that causes loose stools and abdominal cramping. For Americans, the risk for developing TD is particularly high in the developing countries of Latin America, Africa, the Middle East, and in Asia.

What causes TD? TD is caused by consuming food or water that is contaminated with an infectious agent. Approximately 80% of the time, the source is a type of E. coli bacteria (enterotoxigenic), that produces toxins within the bowel. Other bacteria (Campylobacter, Salmonella, Shigella) as well as a variety of viruses (Hepatitis A, Norwalk Virus, Rotavirus), and parasites (Giardia, Cryptosporidium) are less common causative agents.

Are certain people at risk for developing TD? Travelers to areas of the world with substandard water purification or sanitary practices are at particular risk for the development of TD. Young adults, people taking certain medications including stomach acid-blockers (Prevacid, Prilosec, others) or immune-suppressants (prednisone, methotrexate, others), and people with certain diseases, such as diabetes or inflammatory bowel disease are at particular risk.

What are the symptoms of TD? Most people with TD have the sudden onset of diarrhea, passing 4 to 5 loose stools per day. This may be accompanied by abdominal cramps, nausea, vomiting, generalized weakness or discomfort, or low-grade fever.

How is TD treated? Traveler’s diarrhea usually resolves on its own within 48 hours and is rarely life threatening. Drinking clear liquids or oral rehydration solutions to prevent dehydration and loss of electrolytes is usually all that is required. A rehydrating solution can be prepared by mixing together:

Taking antimotility agents (Imodium, Lomotil) can relieve TD-associated diarrhea and cramps, but they may also prolong the duration of the illness. Antibiotics can shorten a course of diarrhea and discomfort, but taking them is generally unnecessary. However, when symptoms warrant, such as with the development of bloody diarrhea, high fever, or severe cramps, antibiotics belonging to the fluoroquinolone group ( Cipro, Norfloxacin) have been shown to be effective.

Can medications prevent TD? Certain antibiotics have been shown to be effective at preventing travelers’ diarrhea, however, the CDC does not generally recommend that they be used. The reasons for this include the relatively benign nature of TD, the possibility of adverse effects from taking an antibiotic, and the risk of the development of antibiotic-resistant organisms. Bismuth subsalicylate preparations, such as Pepto Bismol, taken as 1 oz of liquid or two 262.5-mg tablets four times daily can reduce the risk of becoming infected with the common bacteria that cause TD. This medication is not recommended for children, pregnant women, or people who are allergic to aspirin.

How else can TD be prevented?
The risk of developing TD can be greatly reduced with attention to the following measures:

Other sources of contamination that people may not think about while travelling include getting water in the mouth while showering, rinsing with tap water after tooth brushing (use bottle or filtered water instead), and drinking beverages chilled with ice made from tap water. Medical attention should be sought for severe or persistent symptoms of TD to determine the exact cause and proper treatment.

If you have any more questions just Ask Hanna, our health advisors are here to help.
Image: ©Shutterstock / WAYHOME studio