What and where are brain-eating amoebas? 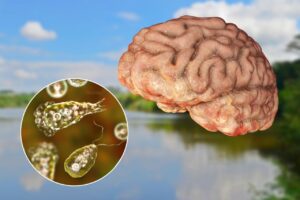 This summer, reports have emerged of a woman who died following an infection with “brain-eating” amoeba contracted while rafting at the U.S. National Whitewater Center in North Carolina and a man who contracted “flesh eating” bacteria after swimming in the Gulf of Mexico. What are these infections and how great a concern are they for the average person enjoying an outing on a lake, river or at the beach?

“Brain-eating” Amoeba
The scientific name for the organism commonly referred to as the “brain-eating” amoeba is Naegleria fowleri. Naegleria is a single-celled living organism that is commonly found in warm, fresh water lakes and rivers, particularly in the southern U.S. Rarely, Naegleria has been responsible for causing a brain infection called amoebic meningoencephalitis. Most cases appear to develop after water contaminated with the amoeba enters the nose while swimming or diving. There is currently no effective treatment for this infection and once it develops it is usually fatal. Fortunately, brain infections caused by Naegleria are very rare. In fact, in the 10 year period from 2006 to 2015 the Centers for Disease Control have reported only 37 cases in the U.S. Chlorine kills this amoeba so swimming in an adequately disinfected pool poses no risk of developing the infection. Since the organism does not live in salt water, there is no risk of developing this infection when swimming in the ocean.
“Flesh-eating” Infections:

The disease attributed to “flesh-eating” bacteria is known in medical terminology as necrotizing fasciitis. “Necrotizing” refers to the death of tissue. “Fasciitis” implies that the infection involves a deep layer of connective tissue (fascia) that surrounds muscles, nerves and blood vessels. No single strain of bacteria is designated as flesh-eating; instead this infection can be caused by several types of bacteria including Strep, Staph, and Vibrio. In most instances, infections with these organisms are relatively superficial and are not limb- or life-threatening. Fascia, however, is a deep tissue structure that is arranged in layers called “planes”. Should the infection reach the fascia, rapid progression of the infection can occur as bacteria and the toxins that they produce spread between these fascial planes.

Most cases of necrotizing fasciitis begin with a break in the skin, such as a cut, puncture wound or surgical incision, that subsequently becomes infected. Having a condition that causes compromise of the immune system, such as diabetes, liver cirrhosis, or being on cancer chemotherapy increases the risk of developing this infection.
Necrotizing fasciitis is considered to be a rare disease that is not primarily contracted through exposure to contaminated recreational water. It is important, however, that any cut, scrape or puncture wound to the skin be cleaned thoroughly to avoid developing an infection. Also, you should avoid spending time in hot tubs, swimming pools, and natural bodies of water until infections are healed.

An even greater concern:

Symptoms suggesting the development of either of these conditions warrants immediate medical attention. Meningoencephalitis symptoms include headache, fever, nausea, vomiting, stiff neck, and confusion. The initial signs and symptoms of necrotizing fasciitis include pain, redness, and swelling at the site of the infection along with fever. In regard to concerns that swimming in natural bodies of water is hazardous, be aware that an even more serious concern is the risk of drowning. In the 10 year period between 2001 and 2010, there were over 34,000 drowning deaths in the U.S. The number of cases of “brain-eating” amoeba and “flesh-eating” bacteria infections associated with swimming in lakes, rivers and the ocean combined are only a small fraction of this number.

If you have any more questions just Ask Hanna, our health advisors are here to help.
Image: ©Shutterstock / Kateryna Kon