Is it better to do cardio or weight lifting exercise? - Health Channel

Is it better to do cardio or weight lifting exercise? 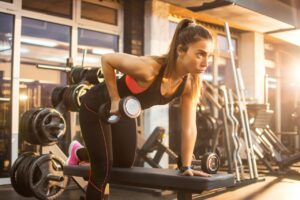 Back in the early 70’s, Kenneth Cooper, M.D popularized the term “aerobics”, which referred to the types of exercise that focused on cardiorespiratory fitness. This spurred on the jogging, cycling and walking craze which continues today. Aerobic exercise, also known as “cardiovascular” or “cardio” exercise, utilizes major muscles such as those in the arms and legs walking while increasing heart and respiratory rate. Examples of this type of exercise include jogging, aerobic dancing, rowing and bicycling. Since then Dr. Cooper’s Aerobics Center and numerous other researchers have confirmed the health benefits of aerobic exercise which range from increased longevity to reduction in the risk of developing certain types of cancer and heart disease.  At the outset of the aerobics boom, resistance training or weight lifting was thought of as a means to building muscle mass, increasing strength or enhancing sports performance, but it took a back seat in terms of promoting general health. Over the past several years, this previously held perception is being reevaluated, with clear benefits being reported with resistance training in the literature.  This has led to a great deal of confusion among many people who want to do what is best for their health.   Additionally, for those with busy schedules, it is important to be able to get the “most bang for the buck” in terms of their time commitment to exercise.  In today’s health tip, I’ll try to point out some of the confirmed benefits of aerobic (cardio) and resistance exercise and also dispel some of myths surrounding each.

Effect on hypertension
Studies have shown that regular cardio exercise can reduce systolic blood pressure (the top number) anywhere from 4 to 9 mm (points).  The greatest benefit appears to come from a moderate-intensity exercise as compared to higher intensity workouts.  Some studies have also shown sustained improvement, although not as great as with cardio activity, in people participating in a resistance training program.  When lifting weights, systolic and diastolic blood pressures can actually increase temporarily, indicating the need for caution among individuals with uncontrolled hypertension or heart disease.  Resistance training does not, however, lead to the development of hypertension.

Effect on blood lipids
For some time it has been known that cardio exercise can increase the level of “good cholesterol” (HDL cholesterol) and lower blood triglycerides in those with elevated levels.  More recently it has been found that resistance training can bring about similar results.  It appears that the resistance programs that use lower weights with higher repetitions are the ones that are best at improving lipid profiles.  Combining aerobics with resistance training appears to be the optimal way to address elevated blood lipids.

Effect of oxygen uptake
In numerous studies, aerobic exercise has been confirmed to improve maximum oxygen uptake (VO2 max).  In sedentary persons, an improvement in VO2 max of 10-20% will occur with a minimum of 20 minutes of moderate-intensity aerobic exercise done at least 3 days a week.  Exercising at higher intensities will improve VO2 max even more. Typical resistance training programs that utilize “sets” of weight lifting with rest periods between have not demonstrated this same degree of improvement in VO2 max.  “Circuit training” programs, however, in which the individual moves rapidly between resistance exercises with minimal rest, have been shown to produce modest improvement in VO2 max.  These programs may be performed with exercise machines, hand-held weights, elastic resistance, calisthenics or any combination.

Effect on calorie burning
Exercise is an essential component of an effective weight loss program.  Aerobic activity alone, keeping caloric intake at the same level, causes weight loss primarily by “burning” body fat.  With diet alone, reduction in weight may occur, but this can be at the expense of lean body tissue (muscle).  A number off studies have shown that sustained weight loss is more likely when a reduced calorie diet is coupled with a regular exercise program. Resistance training programs (particularly those using circuit methods) have shown improvements in body weight and fat mass comparable to aerobic programs.

Effect on strength
This is one area where resistance training clearly stands out.  By pitting muscles against resistance, such as  a barbell or weight machine, the muscle cells eventually become larger and stronger.  When beginning resistance training, the initial increase in strength is due to a phenomenon called “neural adaptation.” This means that the nerves servicing the muscles “fire” more frequently and more muscle fibers are recruited to perform the contraction.  Through neural adaptation, you become stronger, but the muscles remain the same size. With continued resistance training, the muscle cells eventually increase in size (hypertrophy).  While aerobic exercise does work the larger muscles of the arms and legs, its primary benefit is to improve heart and lung function.

Final thoughts
This Health Tip only touches on the many benefits of these two types of exercise.  The “take home” message is that there are clear and undeniable reasons to incorporate exercise into your life.  An ideal program should include elements of each type.  The American College of Sports Medicine recommends that all Americans should try to receive “30-60 minutes of moderate-intensity exercise (five days per week) or 20-60 minutes of vigorous-intensity exercise (three days per week) and perform strength training on two non-consecutive days each week.”  From the above discussion, it is clear that there are complimentary benefits from participation in both types of exercise.

Sources for article:
Hypertension and weight training: secrets for success from The Cooper Institute
Exercises to Control Your Cholesterol from WebMD
How much am I burning? From Mayo Clinic
ACSM Issues New Recommendations on Quantity and Quality of Exercise from the American College of Sports Medicine

If you have any more questions just Ask Hanna, our health advisors are here to help.
Image: ©Shutterstock / Bojan Milinkov