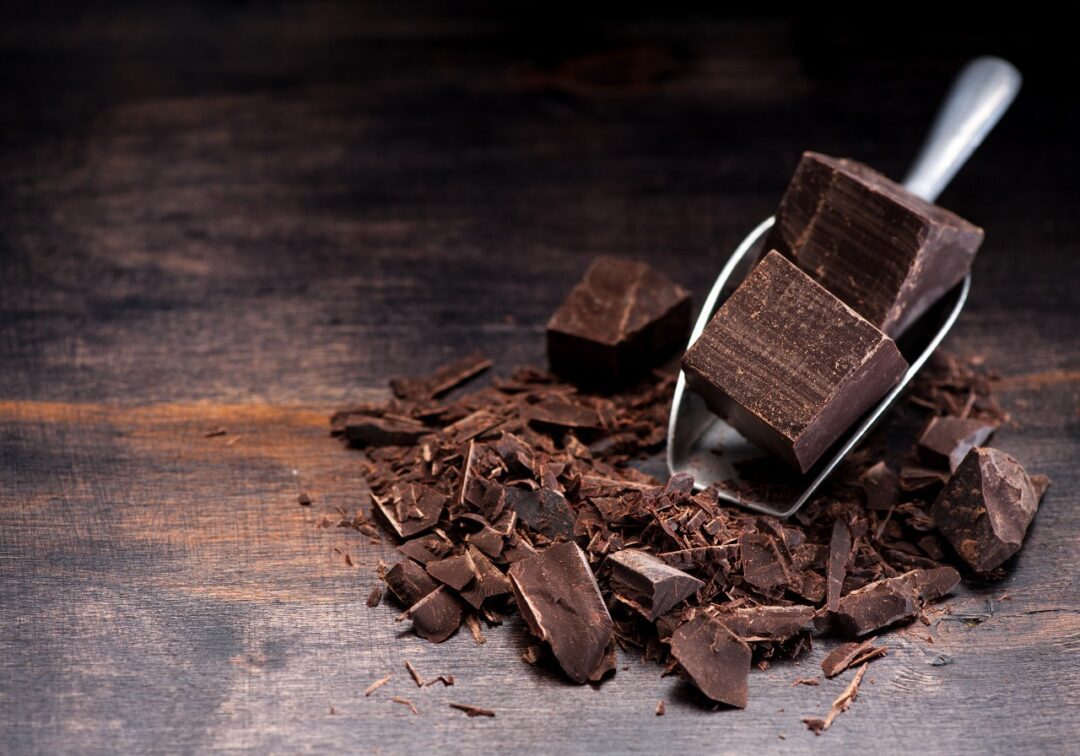 In the past, chocolate has been considered an indulgence without benefits beyond pleasing our taste buds. Recent evidence, however, has shown that there may be significant health benefits to eating chocolate. The key to receiving these health benefits appears to be the type and amount of chocolate being consumed.

What is the origin of chocolate?
Chocolate comes from seeds (“beans”) of the fruit of the cacao tree. Cacao trees flourish only in the hot, rainy tropics of the equatorial region. Chocolate’s origins can be traced back to Mayan and Aztec civilizations in Central America who roasted cocoa beans to make a bitter drink called “chocolatl”. It was introduced into Europe by Spanish conquistadors returning from the Americas. Many years later a process for making chocolate into a solid was developed. Modern production of chocolate involves roasting and grinding cocoa beans in order to make a paste (chocolate liquor). The paste, mixed with sugar, milk, and other ingredients is heated and cooled resulting in solid chocolate. Different forms of chocolate have different percentages of cocoa. Dark chocolate is approximately 70% cocoa, whereas “white” chocolate has practically none of the cocoa solids.
What is it about chocolate that makes it healthy?
Dark chocolate and cocoa are particularly high in flavonoids, a subgroup of antioxidants known as polyphenols. Flavonoids are also present in higher concentrations in tea, red wine, and certain fruits and vegetables. Recent research has found evidence that when these flavonoids undergo fermentation by bacteria in the human gut, anti-inflammatory compounds that improve blood vessel function are produced.
What are the suggested health benefits of chocolate?
Are all types of chocolate equally beneficial?
Definitely not! Since its discovery, chocolate has morphed into a variety of products—powdered cocoa, dark chocolate, semi-sweet chocolate, baking chocolate, milk chocolate, white chocolate, etc. The FDA has established standards for each of these, depending on the percentage of cocoa solids that they contain.  The higher the percentage of cocoa, the more flavonoids and potential health benefits will be found in the chocolate. Dark chocolate typically contains around 70% cocoa, whereas most milk chocolate has a much lower percentage of cocoa solids. White chocolate, which contains no cocoa solids, contains none of the health-promoting flavonoids. The “dark side” of all types of chocolate is that they contain a large amount of fat and are relatively calorie dense.
So, for now, even though the amount of chocolate necessary for optimal health ben efits has not been determined, it appears that eating an ounce of dark chocolate, up to 7 ounces a week, can not only please your taste buds but may offer real health benefits. Look for dark chocolate with around 70% cocoa or “chocolate solids” and keep portions at a moderate level to avoid expanding your waistline.

If you have any more questions just Ask Hanna, our health advisors are here to help.
Image: ©Shutterstock / Marina Shanti