How serious is a concussion? - Health Channel

How serious is a concussion? 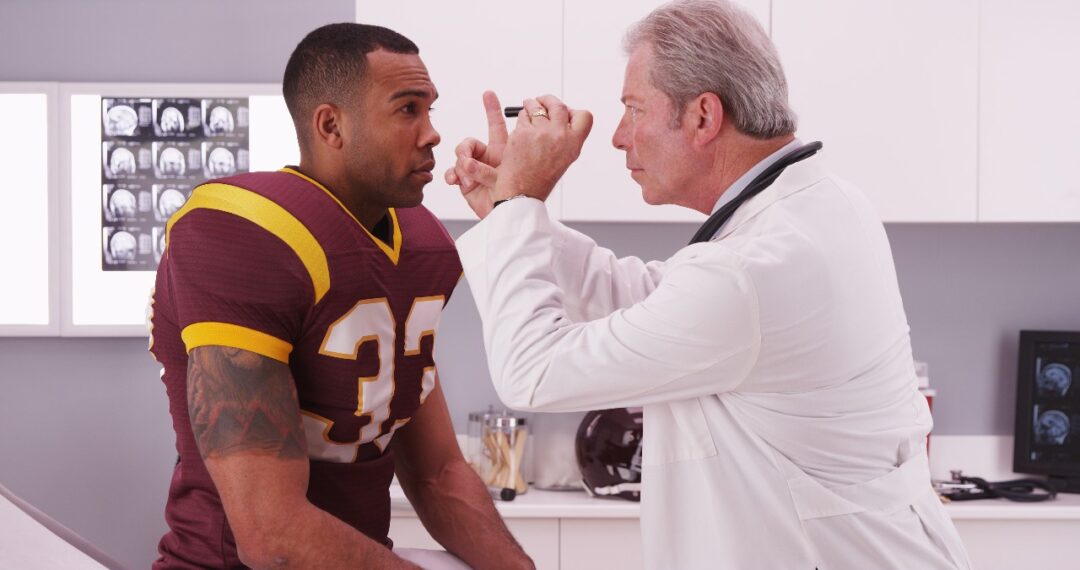 The U.S. Centers for Disease Control reports that as many as 175,000 sports-related concussions occur each year. These concussions occur not only in elite and professional athletes, but also affect recreational athletes, “weekend warriors”, student athletes, and children. While once considered to be fairly benign, it should be recognized that concussions represent traumatic brain injuries and in some cases can have serious long-term effects.

What is a concussion? A concussion may be caused by either a direct blow to the head or violent shaking of the head. Symptoms can range from mild to severe and include confusion, headache, nausea/vomiting, seeing flashing lights, and loss of consciousness. A concussion can occur without loss of consciousness, and, in fact, most people who sustain a concussion never black out. Physical signs that may be observed by coaches or parents following a concussion include confusion regarding an assignment, loss of coordination, inability to recall events prior to or after the injury, forgetting an instruction, and appearing dazed or stunned.

Are some concussions worse than others? Most concussions are short-lived, with recovery occurring within 7 to 10 days. But in some people, symptoms can last for days, weeks, or longer. In general, recovery is slower among older adults, young children, and teens. Once an athlete has sustained a concussion, he or she is at greater risk for additional concussions, which can have long-term consequences. In rare instances, the head injury that causes the concussion can also result in the formation of a blood clot (epidural or subdural hematoma) that presses the brain against the skull. This can be a life-threatening situation requiring emergency surgery. Signs or symptoms suggesting the presence of an intracranial bleeding include increasing confusion or agitation, convulsions, dilation of the pupil in one eye, and coma.

What should be done if a concussion occurs? Because of the potential long-term consequences of sports concussion, it is important that athletes, coaches, and parents know how to recognize them. If a coach or athletic trainer suspects that an athlete has sustained a concussion, the player should be removed from play and responsible parties should be notified. If signs or symptoms point to the occurrence of a severe traumatic brain injury, the athlete should be seen in an Emergency Department for evaluation.

How are concussions diagnosed? In most cases, diagnosis is made based on the events surrounding the injury and the signs and symptoms developing afterward. In addition to the history, the doctor will perform a neurological examination, which tests for balance, coordination, vision, hearing, and reflexes. A computerized tomography (CT) scan is the standard test to assess post-concussion damage. Not every concussion requires a CT scan, however, but the test is usually done as a precaution if there’s a chance of severe injury.

What is the best treatment for a concussion? Following a concussion, the most important treatment measure is complete rest. This includes both mental, as well as physical rest. Reading, computer work, video games — even television — should be limited until all symptoms have resolved. This typically takes 7 to 10 days, although some people have symptoms for weeks or months after the injury. There is no specific medication used to treat concussions. Post-concussive headache is usually treated with over-the-counter medications, such as acetaminophen.

When can the athlete safely return to play? It is critical that the athlete become symptom free before returning to play. A repeat concussion that occurs before the brain recovers from the first can slow recovery or increase the likelihood of having long-term problems. Furthermore, a rare, but potentially fatal condition known as “second impact syndrome”, has been reported in athletes who return to play while still experiencing post-concussive symptoms. In these individuals, a second head injury appears to initiate a chain of events culminating with severe brain swelling and in some instances, death. The main criteria for an athlete’s return to play include complete clearing of all symptoms, restoration of memory and concentration, and no symptoms after provocative testing. Provocative testing involves activities such a sprinting or sit-ups that raises the athlete’s blood pressure and heart rate. The length of time that it takes for complete resolution of symptoms is variable. In milder cases the athlete may be able to return to play in 7 to 10 days, whereas in more severe instances it can be weeks to months before symptoms have completely resolved.

What sort of long-term complications can occur after a concussion? Post-concussive syndrome consists of prolonged symptoms following the initial head injury that can last for weeks to months. Post-concussive symptoms include recurrent headaches, dizziness, memory impairment, sensitivity to light and noise, inability to concentrate, depression, and an unsteady gait. People who have had a concussion are at increased risk of developing epilepsy for several years after the injury. There also is evidence that people who have had multiple concussions over the course of their lives experience cumulative neurological damage.

Can concussions be prevented? There is no way to completely eliminate the risk of concussion from contact and collision sports. Approved and appropriately worn helmets can help, but unfortunately, there is no such thing as a concussion-proof helmet. In addition to head protection, young athletes must be trained in safe sports technique and to follow the rules of the game. With increased awareness of the signs and symptoms of concussions, however, earlier treatment will hopefully be provided and some of the long-term complications of concussions avoided.

If you have any more questions just Ask Hanna, our health advisors are here to help.
Image: ©Shutterstock / Rocketclips, Inc.