How do I calm Restless Leg Syndrome? - Health Channel

How do I calm Restless Leg Syndrome? 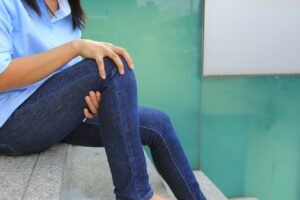 Occasionally, medical complaints can be so vague or bizarre that it inhibits those suffering such symptoms from reporting them to their doctors. Restless leg syndrome (RLS) is such a disorder. RLS is neurological condition that is characterized by unpleasant sensations in the legs, and an uncontrollable urge to move the legs in an effort to relieve these feelings. It may alternately be described as an aching, burning, “pins and needles,” or a “creepy crawly” sensation in the legs. The sensations are particularly bad at rest or when trying to go to sleep. Characteristically, RLS symptoms lessen by moving the legs. People with this disorder try stretching, walking, pacing or exercising in an attempt to combat the uncomfortable sensation in their legs. This irresistible urge to move the legs is where the name comes from. RLS affects up to 10% of the US population, with men and women being equally affected. RLS may begin at any age, but most of those who are affected severely are middle-aged or older. Childhood RLS is estimated to affect almost 1 million school-age children.

What causes RLS? In most cases, the cause of RLS is unknown. A family history of the condition is found in approximately half suffering this condition, suggesting a genetic tendency. In some cases, an underlying medical condition is responsible. These conditions include iron deficiency anemia, diabetes, kidney failure, and pregnancy.

How is RLS diagnosed? There is no single diagnostic test for RLS. The disorder is diagnosed clinically by evaluating the patient’s history and symptoms. The four major criteria used to make the diagnosis are: (1) the need or urge to move the limbs, (2) characteristic symptoms that triggered by rest, relaxation, or sleep, 3) relief of symptoms with movement, and (4) symptoms that are worse at night and better in the morning. Laboratory testing may be performed, primarily to evaluate for some of the associated conditions. On occasion, special tests of nerve function or a sleep study is necessary to rule out other conditions

How is RLS treated? When a specific condition is responsible, the best way of treating RLS is to address that underlying problem. This may entail taking iron supplements in someone with iron deficiency anemia or blood sugar management in someone with diabetes. When the cause for RLS is unknown, there is no effective cure. There are treatments, however, aimed at reducing stress and helping muscles relax, which can help with the symptoms.

Lifestyle measures play an important role in alleviating symptoms associated with restless legs syndrome. The most important of these are:

Medications are generally reserved for people with RLS who fail to find relief with lifestyle measures. Two medications with FDA approval for the treatment of RLS are pramipexole (Mirapex) and ropinirole (Requip). These are called “dopaminergic agents” because they increase a substance known as dopamine in the brain that is involved in nerve transmission. Other medications that may be used in treating RLS include: 1) carbidopa/levodopa (Sinemet), a drug more commonly used to treat Parkinson’s disease, 2) clonazepam (Klonopin) and diazepam (Valium), used to help with sleep and muscle spasms and, 3) gabapentin (Neurontin) and pregabalin (Lyrica), anticonvulsants that can help decrease sensory disturbances such as the “creepy crawly” sensations. Opiate pain medications (Darvon, Tylenol #3, Vicodin, others) are sometimes given, but their addictive potential limits their long-term usefulness. It should be noted also that there are several medications that have been reported to make symptoms of RLS worse. These include OTC antihistamines, such as Benadryl, found in many cold or allergy medications, and anti-nausea medications, like meclizine and Phenergan.

What is the long-term outlook for someone with RLS? In most cases, RLS is a life-long condition that must be managed, rather than cured. This is similar to hypertension, in that it may not go away, but can be controlled. Through a combination of self-care measures and judicious use of medications, most people with RLS can find significant relief of symptoms.

If you have any more questions just Ask Hanna, our health advisors are here to help.
Image: ©Shutterstock / Monthira