Does my asthma inhaler affect the ozone? - Health Channel

Does my asthma inhaler affect the ozone? 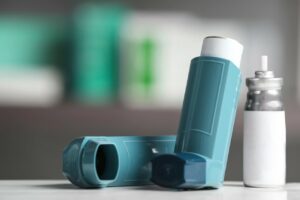 Since 2009, a quiet transition has been occurring to replace the propellant currently being used in inhaled medications with a more environmentally friendly product. By the end of this year, the last two medications that use an ozone-depleting propellant will have been removed from the market.

Prior to 2009, chloroflurocarbons (CFCs) were widely used to propel inhaled medications from a canister into the patient’s lungs. While this chemical propellant was safe to the patient, it was found to have damaging effects on the earth’s ozone layer. Loss of the ozone layer allows more of the sun’s harmful ultraviolet (UV) radiation to reach the earth. Excessive UV radiation can lead to an increased incidence of skin cancers and the development of cataracts.

It may seem implausible that the relatively small amount of propellant in a small canister could cause problems of that magnitude, but when you realize that over 52 million prescriptions are written for a single inhaled medication each year, the cumulative amount of CFCs being released into the atmosphere was significant.

The discontinuation of CFC-propelled inhalers came about as a result of the US Clean Air Act and an international treaty known as the Montreal Protocol on Substances That Deplete the Ozone Layer. The chemical propellants that are replacing CFCs are ozone-friendly chemicals known as HFAs, hydrofluoroalkanes. A second approved method of delivering inhaled medications involves the use of dry powder inhalers. These are somewhat more difficult, however, to use than the metered dose inhaler (MDI) that uses a chemical propellant.

The change to HFA-propelled inhalers has been going on since 2009, in order to allow those people to make the switch more gradually. The last of the CFC-containing inhaler will be off the market by. Dec. 31, 2013. Testing has shown that there are minimal differences in the effectiveness of the two types of inhalers. The major differences have to do with the HFA inhalers being more expensive as well as requiring more maintenance to prevent clogging of the inhaler’s nozzle.

Several of the replacements for those that contained CFCs will have the initials, HFA, at the end. For example, the brand name metered-dose inhalers that are replacing albuterol bronchodilatos are, Proventil-HFA, Ventolin-HFA, Xopenex-HFA, and ProAir-HFA. Symbicort, QVAR-HFA and Flovent-HFA are a few of the trade-named inhaled corticosteroids new to the market. As mentioned, some of the inhaled medications are available in powered form also. Pulmicort Turbohaler and Flovent Diskus are powdered forms of corticosteroids. Advair Diskus is a powdered combination of a bronchodilator and corticosteroid.

While there are definite drawbacks to these newer HFA-containing inhaled medications, in particular their expense, it is hoped that the “greater good” will be served in the long term by reducing the CFF-related damage to the ozone layer.

If you have any more questions just Ask Hanna, our health advisors are here to help.
Image: ©Shutterstock / New Africa