Could I be Depressed? - Health Channel

Could I be Depressed? 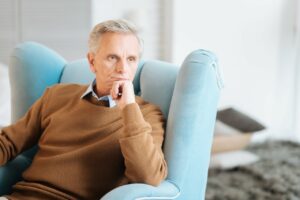 Dysthymia, sometimes considered to be “chronic depression” has symptoms that are less severe than major depression but may have been present for a much longer period of time. Minor depression is similar to major depression except it only has two to four of the symptoms mentioned above.
In spite of how common depression is in the general population, it frequently goes undetected and untreated. The U.S. Preventive Services Task Force (USPSTF) has found that screening performed during doctor’s visits increases the identification of depressed individuals.
A number of different screening tests for depression are used by doctors in the primary care setting. Most of these are self-administered, meaning that the patient completes a questionnaire that asks about various symptoms and physical signs that could indicate depression. Specific tests, such as the Beck Depression Inventory and the Zung Self-Rating Depression Scale, include around 20 questions and are “graded” in order to determine if depression is present, and if so, how severe is it.
More recently, a 2-question depression screening tool was found to have close to the same accuracy as the more extensive questionnaires. Answering “yes” to both of the following questions about mood and pleasure from activities usually found to be enjoyable makes the diagnosis of depression likely:

This 2-question tool is felt to have fairly good sensitivity (correctly identifying people with depression) but only fair specificity (correctly identifying people who aren’t depressed). In other words this screening test did a good job of detecting people who were truly depressed but tended to over diagnose those in whom depression was not a significant issue. For this reason, when the answers to both questions suggest that someone is depressed, a more formal psychological investigation is needed.
Physical problems are not the only reason for seeing the doctor. If you recognize several of the depression symptoms mentioned above or answer “yes” to the 2-question screening test, a visit to your doctor to discuss your feelings is in order. In addition to advising screening for the depression, the USPSTF also found that treating depressed adults with antidepressants, psychotherapy, or both is effective in reducing symptoms and improving productivity. Large-scale studies have, in fact, shown that following initiation of treatment approximately two thirds of individuals achieve remission from their depression within a year.

If you have any more questions just Ask Hanna, our health advisors are here to help.
Image: ©Shutterstock / YAKOBCHUK VIACHESLAV